You are in: Home > Stars > William 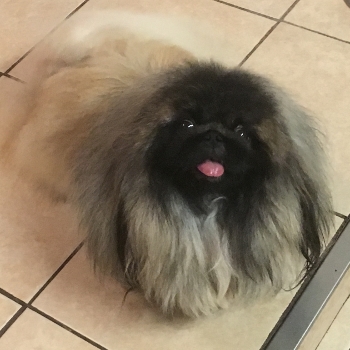 Sometimes more than a little accident….

William is a Pekingese dog belonging to a very longstanding client of ours. He was brought to the surgery one day, his owner was worried because he hadn`t been eating and was vomiting. Two days previously he had been playing with the other dogs at home, boisterously and one had jumped on him. He squeaked then became unwell after  this.

Veterinary Surgeon, Gordon Gray, examined William and found he had a large swelling in his scrotum on the right-hand side which was painful. He was admitted for immediate investigation and treatment. After ultrasound examination, we determined that William had intestines in his scrotum, obviously it is not supposed to be there! What had happened was he had developed a hernia in his groin and some of his abdominal contents had popped through the hole. Surgery was carried out the same day. 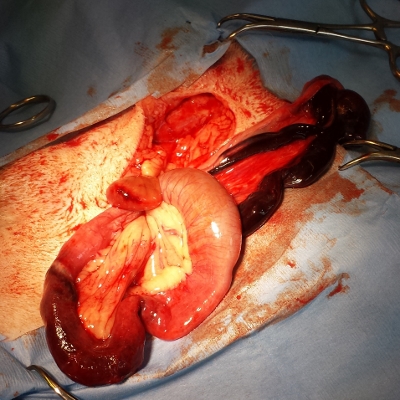 During the operation, it became apparent there was irreversible damage to his testicle and the intestine that had herniated into his scrotum. This was a life-threatening situation. Untreated this injury would be fatal. Gordon had to castrate William and perform an operation called an enterectomy to remove the damaged intestine. This procedure took about 3 hours in total.

The image below shows where Williams intestines were repaired. Thankfully all went well and William has made a full recovery. It took a while and he had several days in and out of hospital and suffered a wound infection. 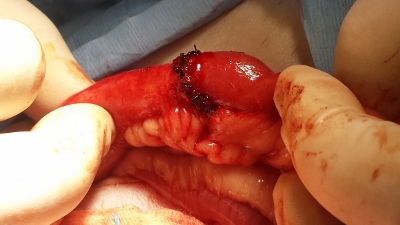 William is now very happy at home with his owner. It just goes to show the most innocuous accident can turn out to be serious. Thankfully, this is a rare condition. Still, think