Continuing the theme of ‘Foreign Bodies’ our Star patient for January 2014 goes to Smudge, a 9 and a half year old male neutered Cavalier King Charles Spaniel, who belongs to Mr and Mrs. Wiles of Sale. 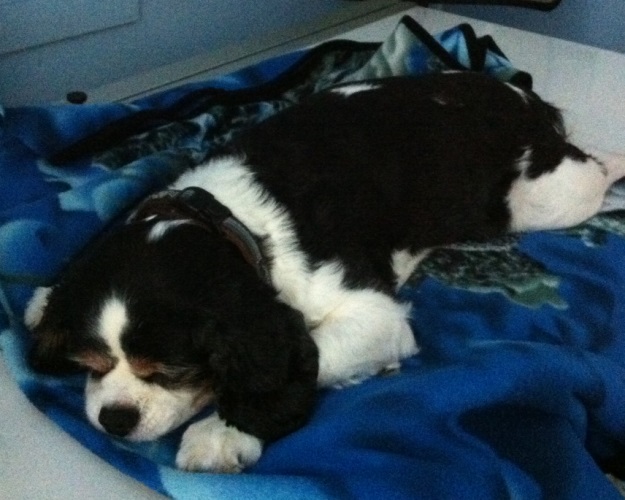 Smudge presented to our Sale surgery on the morning of Monday 9th September 2013. He had eaten through a large lambshank bone on the previous Saturday night (7th September) and

subsequently began to suffer with instantaneous regurgitation thereafter. Suspecting an obstruction, Smudge was admitted for x-ray radiographs to try and locate the obstruction. As seen in the X-Ray image below, Smudge had a section of bone lodged in his oesophagus. 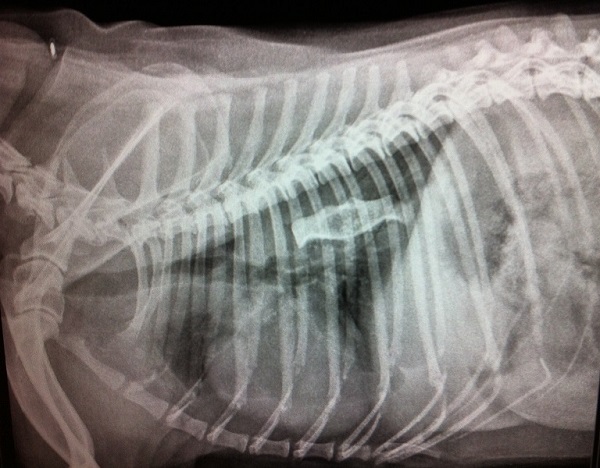 Given the severity of the situation, Smudge was referred to Northwest Surgeons in Chester for emergency treatment. The specialists immediately admitted Smudge for endoscopy to try and retrieve the bone obstruction. We’re pleased to say the procedure was a success, and this ultimately alleviated the need for any major thoracic surgery which would have been the only other option, had endoscopy was not successful.

After a few days of hospitalisation and close observation, Smudge was able to go home.

Smudge’s case was a clear example of the dangers that can occur by feeding treats with a high proportion of bone. Bone is an extremely dense calcified substance that can be very difficult for dogs to digest and can cause obstruction and laceration to the digestive tract. Even for dogs that are used to chewing bones, the attempted breakdown of the bones in the mouth can cause injury to the gums, cheeks and fractures of the teeth. We see many cases of pets with such foreign bodies including dogs fed ‘Raw Diets’ where oesophageal and intestinal perforations from small chicken bones can be a problem as well as cases of life-threatening salmonella from eating raw chicken.

So our best advice would be especially with the festive season approaching is to avoid feeding treats that have any bone material within them.Also consider feeding a healthy safe, complete manufactured diet (one of the best of which is Vet Complex which we stock). The treatment that Smudge received was expensive – another example of a case which highlights the importance of having pet insurance.