You are in: Home > Stars > Smudge the Lucky Cat 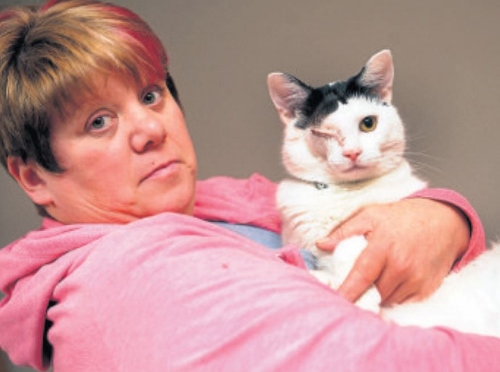 That was the headline in the Leigh Journal! Smudge came to see us in November 2015 with an obvious injury to the right side of the face and blood staining all about his face and upper body. He was bleeding from the eye, had blood coming from his nose and his face was very swollen.

He was treated with powerful pain killers and anti-inflammatory drugs and allowed to stabilise before further tests. The next morning he was a lot brighter and walking about. We admitted Smudge for sedation and X-Rays.

Up until then we thought Smudge had been involved in a traumatic incident like a traffic accident or a fall. But the xrays showed an air gun pelllet situated deep inside the skull. He had been shot at close range or with a powerful weapon. The pellet had entered the orbit, damaged the eye, and pushed through and into the bone in the nasal structures of the skull tearing tissue on its way. 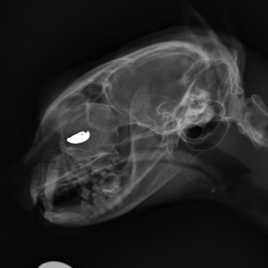 Despite strong treatment to reduce the swelling and prevent infection we were unable to save his eye and removed it surgically on the 25th November.

Smudge has made and excellent recovery, can see fine with his left eye and, fortunately, will not be too bothered emotionally about cosmetic appearance. But he is now frightened to go out and his owner is reluctant to let her other cats out with the knowledge that there are bad and cruel people out there.

We see air gun pellet injuries in cats far more often than anyone would like. Sometimes they cause injury severe enough to result in death – if they penetrate the skull, the lungs or the abdomen where they can tear through intestines causing very painful peritonitis. Sometimes the cats have been fortunate. We x-ray a lot of cats for other reasons and find pellets incidentally. Maybe where they have lost power as they have entered the skin and just sit where they end up for months or years. Sometimes we find them at the base of an abscess where the pellet has taken in a plug of skin covered in bacteria as it enters.

There is a lesson in vigilance here. There are plenty of bad people out there who care little for animal welfare or the effects their actions can have on pets and owners.