The complexity of skin bumps 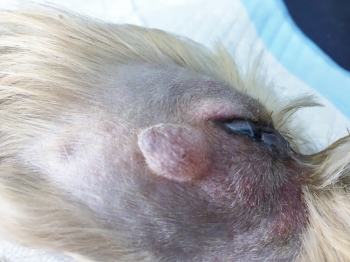 Poppy is a 9 year old Yorkshire Terrier who comes and visits us at the Hindley surgery.She recently came in to the surgery as she had developed a lump just to the side of her right eye. She also had a type of superficial eye infection, known as conjunctivitis, in both of her eyes. This made her eyes very red, producing a green discharge, which is often indicative of infection.

Poppy’s lump was approximately 1cm in size. Although Poppy doesn’t mind visiting the surgery, she is not always keen on the examination part of her visit, like a number of our patients that come to see us!

Veterinary Surgeon, Ailsa Williamson, managed to have a look and a quick feel at the lump, but suggested doing a ‘fine needle aspirate’ (FNA) of the lump, to give us more information about what the lump was.  An FNA involves us taking some samples by repeatedly putting a fine needle into the lump, moving it about to collect a few cells from the area, and then placing the sample collected onto a microscope slide. This is then sent to the lab for analysis. The lab will then look at the slide and then give us a report telling us what they think the cells from the lump represent. For example, if the lump is likely to be benign (confined locally) or malignant (able to infiltrate and spread to other places). We then use this information to determine whether further treatment is required, including surgical removal of the lump, if indicated.

As Poppy can be a little wriggly and with the lump being so close to her right eye, it was arranged for Poppy to return to the surgery the following day so that she could have a sedation in order to do the FNA sample safely. Poppy was also given some antibiotic ointment for her eye infection. Poppy’s owner was asked to starve her that night; this was  to ensure that Poppy could have the sedation safely the following morning.

Poppy returned the following day, along with her owners, and saw Veterinary Surgeon, Simone Holmes. We sedated Poppy with her owners present, to make sure the sedation process was as stress free as possible for Poppy. Poppy was then given a full general anaesthetic as she was still blinking and moving under sedation. 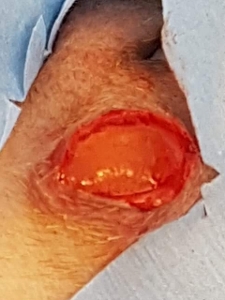 Once Poppy was clipped so we could have a better look, the lump proved to be fairly large, right next to Poppy’s eye, so with consent from her owner we decided as Poppy was already under a full general anaesthetic it was best to remove the lump in its entirety rather than taking the FNA. This was so we could see more of what we were dealing with. Also, tumours near to the eye can be harder to remove wihout causing deformity to the eyelids etc., if they are allowed to grow.

An incision was made over the top of the lump, and using very fine scissors called metzenbaum scissors, Simone carefully started to cut out the lump. During surgery, it became obvious that the lump we were removing was in fact a cyst (a mass with fluid inside it). The cyst was removed (it did leak its fluid during the procedure) but the cyst lining was removed- this should hopefully stop the cyst returning. 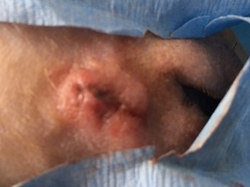 The wound was then closed using a small, absorbable suture material called vicryl. The stitches were placed under the skin so Poppy would not need to have any stitches out; they will dissolve in time.

As the wound was so  close to her eye we didn’t want her rubbing her face and disturbing the wound or getting it infected, so Poppy was woken up from the anaesthetic with a ‘buster collar on’, which she kept on for 2 weeks after the surgery whilst everything healed. Poppy also went home with some anti-inflammatory pain relief, to help with any swelling post surgery and any discomfort that she may have had from the surgery itself.

Poppy came back 2 days later for her post-operative check. This is a check just to ensure that everything has been ok post-surgery with the wound, and to check that Poppy was ok in herself, eating/drinking etc., and comfortable. Poppy was doing well at this point and her eye infection was also improving with the antibiotic ointment. Since then the wound has healed fully and Poppy is back to her normal self.It is not known what had caused this cyst in Poppy, but hopefully by removing the cyst lining it shouldn’t return. 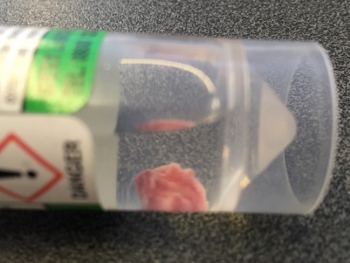 Cysts can be quite a common thing. We see cysts known as sebaceous cysts formed from the sebaceous gland that contains sebum. The purpose of this sebum is to lubricate the hair follicles and skin, if this gland becomes blocked or inflamed it can then lead to a sac like mass forming under the skin containing this fluid leading to a cyst. We also see cysts of the hair follicle themselves. There are many different types of cysts. Pathologists often help us to determine the exact type of cyst if we think it is necessary. The range in cats and dogs includes, giving them their proper names, infundibular cysts, dilated pores, isthmus cysts, panfollicular cysts, dermoid cysts, sebaceous duct cysts, apocrine cysts, ciliated cysts, epithelial inclusion cysts and ceruminous cysts. Sometimes you can get one cyst, other times there can be multiple cysts.

Lumps can come in all types, shapes and sizes, and not all of them are cysts. Some skin growths can be very serious – like melanomas, mast cell tumours, squamous cell carcinomas and lymphosarcoma. If you ever notice a new lump on the skin of your pet it is always worth booking an appointment with the Veterinary Surgeon to have it checked out.