Pasha presented to Vetcare after a hit and run incident near his home. After the impact he ran from the scene  but it took 3 hours for his owner to find him.  Pasha was found hiding and cold in a shallow river near his home. Worried for her faithful friend of the last 14 years, his owner took Pasha home to dry him off and warm him up. Miraculously Pasha appeared no more than a little cold and bruised, but before Pasha came down for a check up to be sure all was well he began to vomit. 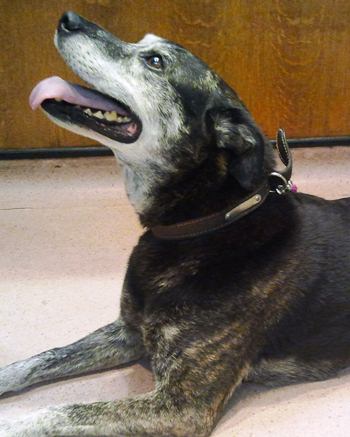 On examination Pasha was found to be remarkably well for a 14year old dog after such a big impact; not a broken bone in sight.  The vomiting was a little concerning especially as he seemed a little uncomfortable in his abdomen. Pasha was administered pain relief for his bruises and blood tests were taken to insure Pasha would be able to cope with further investigations if they were needed.

Blood tests revealed an elevation in Pasha’s Urea, Creatinine and Phosphorous, which vets use to monitor kidney function. Usually these chemicals are removed from the body via the kidneys in the urine, and as Pasha was usually well and had suffered a recent trauma, concerns were raised as to whether he had sustained an injury to his urinary tract.

Pasha underwent an ultrasound scan to look at his bladder which couldn’t be found on the scan, and a urinary catheter was passed which did not retrieve any urine.  At this point his vet was very concerned that Pasha may have had a traumatic bladder rupture, and emergency surgery was recommended to his owner.  One look at Pasha’s wagging tail and the knowledge of what he had survived so far gave his owner an easy decision. If his bladder was ruptured only surgery to repair it would save him, so his vet was given the go ahead to proceed.

Pasha was taken to surgery for and exploratory laparotomy to assess his urinary tract. Sure enough a 3cm tear was evident at one end of a heavily bruised bladder. Careful surgery was performed to repair the hole and provide support for the bruised tissue as it healed. Pasha was stitched up and provided with supportive care for his recovery.

Pasha’s recovery was swift and uneventful. His bladder healed well, he began to pass urine a few hours later, and the vomiting stopped and his appetite returned. His owner couldn’t be more pleased with how fantastically well an older dog can recover from major surgery.  Pasha hasn’t looked back, and was trying to run around again within just a couple of days, although he hopefully won’t be running near the road again soon!

It’s always worth a check up after a traumatic incident, even if your pet appears fine. Sometimes injuries have little or no symptoms to start with and your pet could become seriously ill if left untreated.

Age is just a number! Owners are often very reluctant to do surgery on an older dog, and whilst it is true that some older dogs have conditions that do make procedures more risky, others (like Pasha) are in great health and cope just fine. Your vet can advise you on any risks involved.

Do make sure gates are shut when letting your dog outside, as its all to easy for them to wander off and be hurt in an accident, or cause an accident injuring other road users.