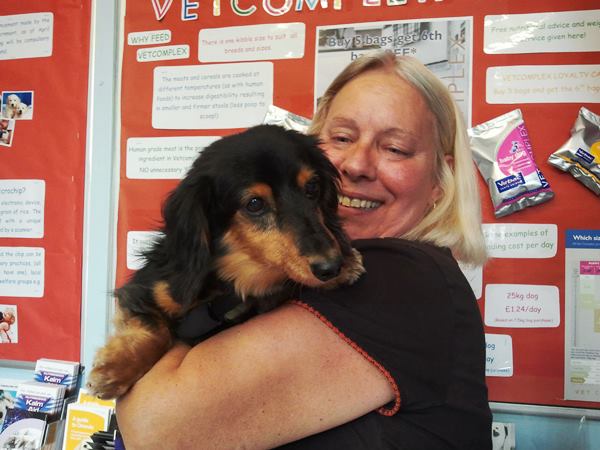 Ozzy presented in late February 2013 as an emergency following a rectal prolapse, where a portion of his rectum had been pushed out through his anus. He had been in excellent health, but had appeared a little constipated for a day or two. He was rushed to theatre and anaesthetised, where the prolapsed tissue could be replaced. A thorough examination revealed that Ozzy had a small 1cm mass inside his rectum, which was causing him to strain, and hence caused the prolapse. A portion of tissue was taken for histopathology (a close examination by a specialist). X-rays were taken of Ozzy’s abdomen to see if there were any more masses but thankfully none could be found.
Ozzy had surgery to replace the prolapse and had a couple of days in our Bolton branch to heal, before being sent home to recover further with some faecal softeners. After a few days the results were back from the lab, which showed that Ozzy had a low grade rectal lymphoma, a type of cancer affecting the tissues lining the rectum.
Ozzy’s owner was obviously devastated, and with Ozzy being nearly 10 years of age, was understandably reluctant to put him through risky surgery to his rectum, or undergo chemotherapy which might make him feel unwell, or have to be in the surgery on infusions. Fortunately, rectal lymphoma can sometimes respond to chemotherapy better than other kinds of lymphomas, so his vet Emma discussed a non- invasive chemotherapy, which could be given in tablet form at home by his owner.
Ozzy’s owner was happy to give this a try, and following some routine blood tests to check Ozzy was fit enough to start treatment, he was started on a course of prednisolone tablets every other day, and a chemotherapy drug called Chlorambucil, that could be given by tablet once a fortnight.
Ozzy took his medication without any significant side effects. His owner had noticed he perhaps drank a little more, and would eat a bit more if she let him, but otherwise she wouldn’t know he was on chemotherapy. He came  monthly for rechecks including blood tests to check his liver and kidney function and steadily his tumour shrank.
By August 2013, just 6 months after starting treatment, his mass had totally disappeared! Ozzy could reduce his dose of steroid to just maintain his therapy, and reduce his monitoring blood tests to one test every 2 months. It is now 16 months since his cancer was diagnosed, and Ozzy is still without any signs of his tumour regrowing.
Ozzy’s owner is thrilled that he is doing so well and is really pleased that the chemotherapy he needed was so straight forward to give. Ozzy is certainly a star pet with Vetcare for remaining cancer free for so long, and has even made the local newspaper for being such a special canine friend.

We see many patients with different types of cancer. Some are treatable with surgery, some with chemotherapy or radiation treatment and some with a combination of different treatments. Some forms of cancer are less treatable.

Modern chemotherapy protocols are safe, have relatively few serious side effects, and can results in a greatly improved life expectancy and quality of life; sometimes cure. Expense is often a barrier to some types of chemotherapy so as always, we strongly recommend that you have your pets insured.