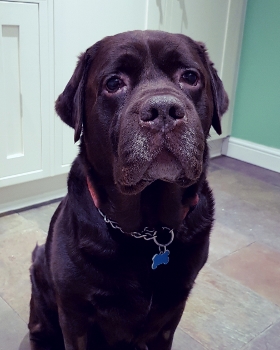 A Surprising and Lucky Find

Oscar came to see us in August 2018 after experiencing a seizure (or fit). When We examined him he was completely back to his normal happy self and we couldn’t find anything abnormal when we did a clinical examination.

We ran some blood tests (Biochemistry, Haematology and Electrolytes) to look for a metabolic, infectious or other cause for the fit(s). We ran the bloods straight away and the results were normal with the exception of increased globulins. Globulins are blood proteins and the main globulin we make are called gamma globulins- which is what antibodies are. So this indicated there may be some immune system stimulation, but gave us no idea why.

Epilepsy is the main cause of seizures in dogs, but adult onset epilepsy is unusual. With there being no history of previous seizures we thought it best to arrange for Oscar to have an MRI scan of his brain.

When the results came back they showed that the brain was entirely normal. Therefore, by ruling out other diseases, we decided that the presumptive diagnosis for Oscar’s fits was epilepsy.

MRI (Magnetic Resonance Imaging) is a great, modern imaging modality that helps us diagnose various diseases and plan surgery. They give a lot of information about what is going on with internal tissues. Whilst we had sent Oscar for images of his brain, the scans also showed up some other findings. 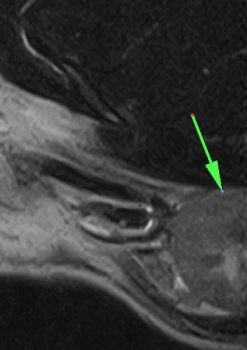 The scans also showed that he had osteoarthritis in his temperomandibular joints (Jaw joints) which doesn’t seem to be causing him any problems eating. We could also see his chronic otitis externa (ear infections and inflammation) on both sides (we already knew about this). But finally, and most importantly, the scan images showed an enlarged left thyroid gland (see image). There are a number of different types of thyroid tumour so we elected to do some ultrasound guided fine needle aspirates and biopsies. These samples confirmed that Oscar had a malignant cancer and further testing by the pathologist identified this as a thyroid carcinoma. These tumours are invasive, with the earliest and most frequent site of metastasis being the lungs, resulting from invasion of tumour cells into the thyroid or jugular veins. We had already xrayed his chest to check for evidence of spread to the lungs (there was none).

We also knew that other than his epilepsy and skin/ear problems Oscar was well in all respects. So we couldn’t just leave nature to take its course. 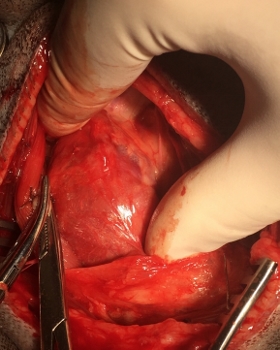 We took Oscar to theatre and in a long operation (where we had to avoid injurying vital neck structures (nerves, major arteries and veins) we removed the tumour and some of the suurrounding tissue in its entirety and sent the mass for histology. The pathologist said there was no evidence of invasion into surrounding tissues which was good, but we couldn’t completely discount the possibility of microscopic metastases.

Oscar made a full recovery and we have examined at intervals since. There were various options available to us including regular imaging to look for extra tumour growth or regrowth or the use of chemotherapy with a drug called Palladia (Toceranib phosphate) to slow down or stop any tumour growth that we didn’t know about.

After discussions with his lovely owners we decided to do nothing and just monitor. Oscar continues to do great. He has treatment for his ears from time to time and is on a drug called phenobarbitone to control his seizures (which he does very well). We last saw Oscar just prior to Christmas for his Annual Health Examination and booster vaccination to prevent parvovirus, distemper and leptospirosis etc. All was well when we examined him and long may this continue. 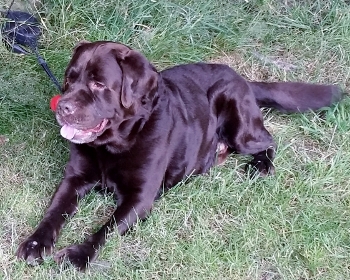 This story may have been very different if his thyroid tumour wasn’t picked up as an incidental finding on his MRI scan.