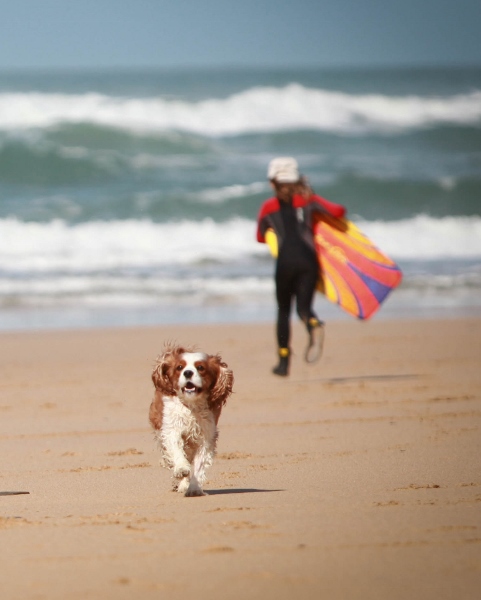 Olly is a 6 year old, Blenheim, Cavalier King Charles Spaniel.  He presented to our Leigh surgery as his owner was concerned that Olly was subdued, had a reduced appetite and was vomiting.  Initially, it was suspected that Olly had gastroenteritis, and he was given antibiotics and a sensitive diet.

Unfortunately, Olly did not improve with his treatment and he was reassessed the following day.  We became concerned that Olly could have an obstruction in his bowel, as he had stopped eating and was no longer passing stools. On palpation of his abdomen he was now uncomfortable and we were suspicious that there was an abnormal thickening of his intestine. 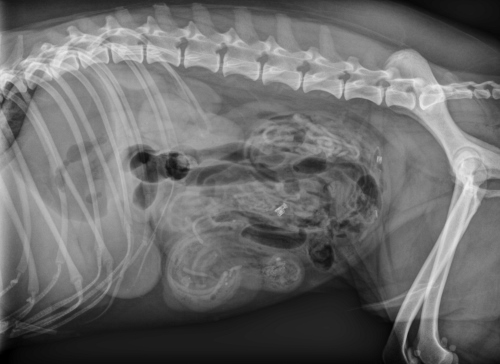 Olly was admitted directly into our hospital for further investigation. We placed him on a drip, to rehydrate him and then, under sedation, we were able to carry out a more thorough abdominal examination including X-rays. The X-ray image here shows foreign material within Olly’s intestine; it looks like lots of string like structures with some smaller metallic areas, which show bright white on the image.  Can you guess what they are?

Olly was taken straight to theatre and we performed an exploratory laparotomy. This is the surgical exploration of the abdomen.  Once inside the abdomen, we found a firm, distended loop of intestine.  We had to cut into the bowel and we retrieved….. around 30 hair elastics!!  It took some time to remove all of the elastics, but, once we had, we placed sutures in the bowel to close it up again and then gave it a thorough clean.  Bowel surgery is a risky procedure: The gut has a high bacterial content and we have to be careful that this does not leak into the abdomen, where it could potentially cause peritonitis and even be fatal. Finally we closed up Olly’s abdomen with sutures in his muscle and skin, and then woke him up from his anaesthetic. 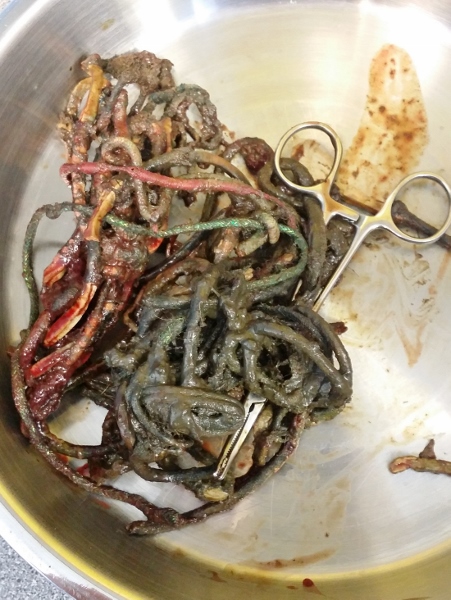 Olly required antibiotics and pain relief for a week following the surgery.  We had to restrict his diet initially to allow the bowel time to heal.  Food was slowly introduced, by giving easily digested meals little and often.  Olly was understandably quiet for a couple of days following the operation, but soon recovered, and was able to join his family on a beach holiday soon afterwards.  Olly has since had his sutures removed and we are pleased to say he has made a full recovery.

Unfortunately, this kind of surgery  is not uncommon in veterinary practice.  Dogs in particular, and sometimes cats, seem to be quite indiscriminate when it comes to what they eat.  Dirty laundry is a favourite it seems, but dummy teats, toys and bedding are also common foreign bodies.

Take care, and monitor what your pet may be ingesting.   Avoid giving toys that are non-destructable, and if your pet has a liking for dirty laundry then do your best to keep it out of your dog’s reach.  Should your dog go off his food, or is unable to keep food down seek veterinary attention promptly. It may just a simple infection, or might be a tummy full of yummy bobbles!