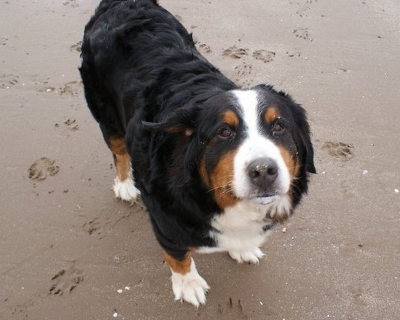 Beautiful Mollie has had her fair share of ups and downs over the years, but, she soldiers on remarkably.

In 2011 this delightful Bernese Mountain dog, who is now 11 years young, had a lump that was initially thought to be a lipoma (fatty lump) removed. However, after the procedure, the Vetcare surgeon strongly recommended histology, as upon closer examination he had concerns it was something more sinister.

Unfortunately, his concerns were absolutely correct, as the histology revealed this was in fact a grade II mast cell tumour 🙁

The best course of action was to refer her, so, off she went with her lovely and very committed owners to Liverpool University to see a specialist. Throughout the months Mollie went between Liverpool and Vetcare at Bolton, and was monitored regularly. Eventually in February 2012 Mollie was discharged from Liverpool! She had done amazingly well!!

However in March this year, Mollie was diagnosed with a thoracic tumour, and is now having palliative treatment which ensures that she will be kept pain free for as long as possible. Quality is what its all about.

So, Moliie is once again taking everything in her stride,and takes 2 different types of tablets daily that enable her to continue to have the fabulous life she has had since being a puppy.

To look at Mollie you wouldnt know she was poorly, she looks fab, and she still has a zest for life.

Mollie is insured, and this has been a Godsend to her owners. It has meant that the very best has always been able to have been done for their beloved Bernese girl.

We will continue to monitor Mol, and she is of course always under the eagle eye of her mum and dad, who know that we are always at the other end of the phone should she deteriorate. When that will be, who knows? She is after all known as Mollie the marvel!!

Mollie will be 11 years old on June 11th,and the life expectancy of a Bernese is 8 years old, so despite all of her problems, she really is a MARVEL!