Lol was presented to us following an attack by another dog. She was in shock, dehydrated, had very weak pulses, pale gums, dull, was in pain and had severe, deep wounds to her perineal area and rump, as well as various other deep bite and puncture wounds. She was admitted to hospital and initially treated for shock to save her life. She needed a range of drugs including opiates for pain relief, antibiotics, intravenous fluid therapy and so on.

It was ‘touch and go ‘ for several days but LOL responded to treatment. She was also several weeks pregnant and our big fear was that her pregnancy would fail or that the pup(s) would be affected by her condition and also by the range of drugs we needed to use.

Her wounds had to be treated under anesthesia. There were large areas of necrotic, infected tissue and she was that bad at one stage we contemplated euthanasia. 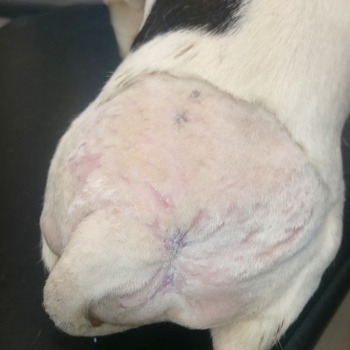 Miraculously LOL began to recover. She didn’t need further surgery on her wounds, just a a range of specialised dressings to optimise healing. We got on top of the infection and all started to heal. Just over 3 weeks later LOL’s largest wound had healed over and looked, cosmetically, very presentable. She gave birth to two pups, one of which survived and is thriving to this day.

So – eventually a happy story which often, for other patients, doesn’t have the same good ending. It was done to the work of a dedicated team of vets and nurses that we managed to save LOL, not forgetting the patience, love and hard work that her owners put into her recovery. Well done to everyone, especially LOL. 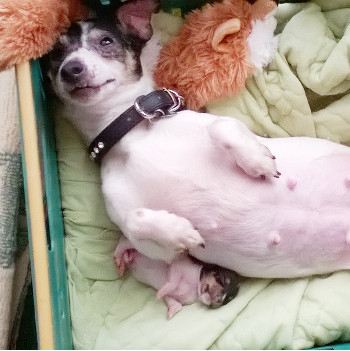 If you think your dog is aggressive in certain situations – with humans, human strangers, out on the lead, with other dogs or with your own dogs then please make an appointment with the Veterinary Surgeon to discuss. Some of our Nurses have behavioural qualifications and all are knowledgeable. There is often a great deal we can do to help. There is some general advice below:

While some breeds developed for fighting or protection may be more included to quarrel, dogs of any breed can get into fights. A dog who is not well-socialized might have dominant body language and stare other dogs right in the eyes, which is perceived as a direct challenge.

It’s a mistake to assume your dog won’t fight. Avoid scary conflicts by staying alert and keeping your dog on a short lead and voice control at all times.

Teaching a dog early on that he can’t visit with every canine he meets is one good you can prevent aggression on the lead. Teach the dog not to pull on the lead, and to sit and wait for permission before greeting another dog. Basic obedience training and behavior modification with positive reinforcement can help prevent fights.

Along with using leads and good training, you can avoid conflicts by keeping your pets from roaming, neutering young dogs and socializing your dogs during the critical puppyhood stage between six to twelve weeks of age.

Some fights occur with little warning, but often you can spot behaviors that signal trouble ahead, so use that opportunity to keep a fight from breaking out.

Watch for these behavioral cues to see if a fight is imminent:

* A hard, unwavering, targeted stare.
* Dominance posturing, such as mounting.
* Stiff body movements.
* Extreme body language: the tail held stiffly up or down, lips pulled tight against the teeth.

If a fight ensues, keep in mind that dogs tend to establish a social hierarchy soon after they meet. Scuffles to determine top dog can involve heavy barking and growling. However, real fights can take place, in which a dog latches onto another dog or otherwise injures him. Intense fights can be silent. If you intervene, do not put your hands anywhere near the dogs’ heads or get between them to avoid getting bitten yourself. If another person is available each person picks a dog and grabs its tail or hind legs, pulling back and up until the dog loosens its grip. The grabber should then move away quickly. There is some risk, since dogs will sometimes turn and bite whoever is hanging on to them.

Prevention, of course, is the best approach. Keeping your dog safe and providing good leadership — is the most important thing you can do.

Dogs react fast, and sometimes get angry toward each other, just like people. The difference is that dogs respond immediately then, typically, forget about it once the disagreement is resolved. Some 90% of a puppies time is spent biting other puppies. This is part of developing bite inhibition, in which young dogs learn how to control their jaws. The optimal time for dogs to develop bite inhibition is between two and four and a half months of age.

* Dogs initiate fighting when they do not feel secure around other dogs.

* The top dog knows he’s boss and usually is able assert rank within 3 seconds. Usually, the top dog does not have to resort to actual fighting to prove his point.

* Middle-ranking order male dogs feel insecure and in need of proving something.

* Females have the potential to engage in fights, and to be as tenacious as males. When females fight with female or male dogs, often it’s to gain a possession.

* Dogs perceive neutered dogs as less of a threat. With male dogs, neutering reduces the chances dogs will bite and neutering is linked with a reduction in several kinds of aggression.

* When dogs growl at younger dogs, this leads to the development of active appeasement on the part of the lower-ranking dog. The lower-ranking dog learns to show deference, which signals that he understands and respects the hierarchy. So then, typically, the older/more dominant dog will let the youngster play.

* Playing is more than having fun for dogs; it’s a way to compete and a way to establish rank.

Positive steps you can take:

* Most people ignore good behaviour. But it is important to praise and reward good behaviour in order to encourage the dog to repeat it. Solicit and praise good behavior, instead of punishing the bad.

* Do not tense up with the lead or yell during the approach of another dog. That can make your dog associate the sight of another dog with punishment.

* Timing is everything, it is crucial for you to develop the ability to redirect your dog’s attention back to you.

* Never allow any dog to achieve dominant status over any adult or child. If dogs always know their social ranking and are never allowed to challenge people, they will usually be good family members,

* Feed dogs in separate areas, rooms or in their own cage.

* Do not toss treats out to dogs. Instead, have each dog obey a command, such as sit, individually, and give the treat right after he/she obeys.

* If any chance dogs will fight over toys, don’t give the dogs toys unless they are in separate locations.

* Do not give dogs toys that fanatically excite them.

* Don’t permit tug-of-war or aggressive wrestling. These games can quickly escalate into a fight.

* Don’t give dogs rawhides, pig hooves or other highly coveted goodies. At the very least, don’t allow dogs free access to them. The dogs are likely to fight over them.