“The God of Mischief” 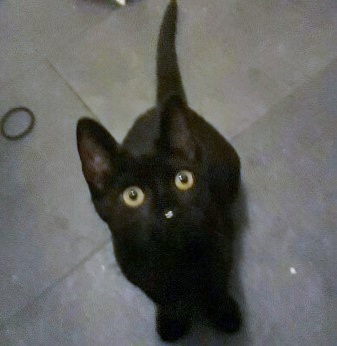 This tiny, approximately 5-weeks-old, black kitten was found in the centre of Leigh and kindly brought to us for treatment. After examination with our Veterinary Surgeon, it was  found that he had banged his head, was cold, dehydrated, covered in parasites and very weak. The fantastic nursing team took him into the hospital for warmth, fluids, treatment for his banged head, worming, ectoparasite medication and some sorely needed TLC.

Over the next few days the kitten was given medication and recovered well from his head trauma. He was hand fed, bathed and kept warm. He soon got over his early misadventure and, through Cats Protection, soon went through the process of finding his ‘forever’ home. 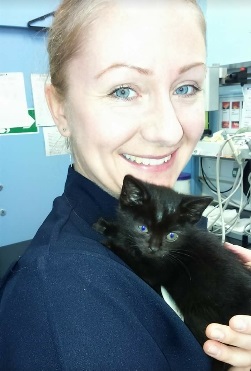 We work very closely with many charities (including Cats Protection) helping to vaccinate and neuter them. This kitten we named Loki after the God of Mischief. We have seen him over December and January for his two primary vaccinations and most recently for neutering and microchipping.

Taking on a new part of the family comes with many responsibilities. Vaccination, neutering and microchippingare a priority but don’t forget about parasite control for fleas, ticks, mites and worms! We also advise pet insurance, an appropriate diet, lots of exercise and interactions to fully socialise your new pet.

As well as a full health examination at the time of your pets vaccinations, we offer a free development check at 6 months. There are also appointment with the nurses available at any time for a Puppy Club where we discuss all of the above plus any behavioural issues such as toilet training / mouthing behaviours etc.

Loki is now approximately 4 and a half months old, growing well and starting to live up to his name!