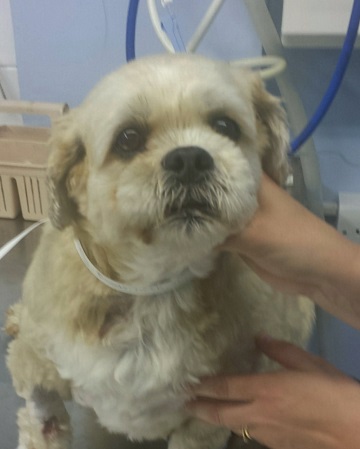 Larry is an 8 year old Lhasa Apso, he has been coming to see us since he was a very small puppy.

I think Larry has had a lot to put up with in the last year, but he`s never really let it get him down. Last August he was diagnosed with Diabetes Mellitus. His owner, Mrs Kelly, brought him in saying he was excessively thirsty and brought in a urine sample that had lots of glucose in it. We took a blood sample from him which confirmed he had very high blood glucose (sugar) levels. In dogs this requires treatment with insulin injections twice daily, the treatment is lifelong.

He responded well to treatment initially. We had him in at the surgery to carry out tests to make sure he was having the correct dose of insulin, which confirmed he was responding well to treatment. Which remained the case for several months.

In May Larry came in with a painful right eye which was diagnosed as a corneal ulcer, which is a defect on the surface of the eye. This is a common thing to find in dogs and we treat quite a number of them. Larry didn`t respond to medical treatment so we had to carry out  minor surgery on his eye under general anaesthetic. The Vet, Gordon Gray (who has a special interest in eyes) debrided his ulcer and placed a third eyelid flap to protect the surface of the eye. Basically this is where the 3rd eyelid is stitched to the upper eyelid to cover the cornea and protect the surface of the eye. This worked very well and when the sutures were removed Larry`s eye had healed fully.

As part of the above procedure we carried out pre anaesthetic blood tests on Larry which showed he had persistently high liver enzymes. So we carried out an ultrasound scan on his liver and did further blood tests on him the next week. He was then also confirmed to be suffering from Cushing’s Syndrome. Which is a disorder where you have to much cortisol in the bloodstream because the adrenal gland is overactive. This requires lifelong medical treatment as well with tablets.

Larry has had follow up tests after starting treatment with tablets (vetoryl), his owner says he is much brighter and the tests show good results.

That is a lot of vet visits in a year which Larry never complains about, and a lot of treatment. He is lucky to such dedicated owners ( and good insurance withPetplan).

If your pet is drinking excessively, has gained or lost weight, then come and see us – preferably with a urine sample. Many conditions can cause excess thirst including diabetes, Cushing’s disease, kidney problems, urinary infections and so on.

If your pet has a sore or abnormally appearing eye then come and see us as an emergency. There are many eye conditions, including corneal ulcers, that if left untreated can end in blindness, or in the worst cases, the eye may need to be removed. Most sore eyes are usually simple problems, easy to treat, but many can be far more serious. 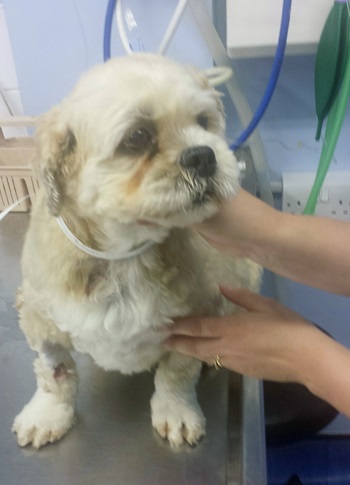