Not all bumps are lumps! 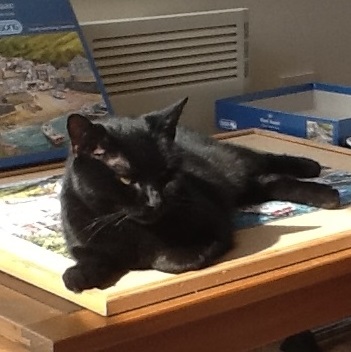 Kitty is a delightful cat, eleven years of age, belonging to the Smith family.  Kitty was brought into the Leigh surgery recently by her concerned owner.  Kitty had been off colour with non specific symptoms, being not quite right. Chad Northcott, Kitty’s vet for the day, gave Kitty a thorough examination and was concerned that Kitty’s abdomen was swollen.  There are many things that can cause abdominal swelling in pets, including pregnancy, tumours and fluid build up.  Since there weren’t any other specific signs to  give us any clues as to the cause, and as Kitty was neutered so we could rule out pregnancy, Chad advised that we carry out some further tests.

Kitty was admitted into our hospital for the day, where we carried out a range of investigations starting with blood tests. The blood tests were normal apart from her having a low red blood cell count, indicating Kitty was anaemic.  Following this we sedated Kitty to be able to carry out X rays and an ultrasound examination.

The results of these tests showed that Kitty had an enormous abdominal cyst.  The cyst occupied the whole of the abdominal cavity.  Cysts are fluid filled masses and are not commonly found in the abdomen of a neutered cat (unneutered female cats can have ovarian cysts). 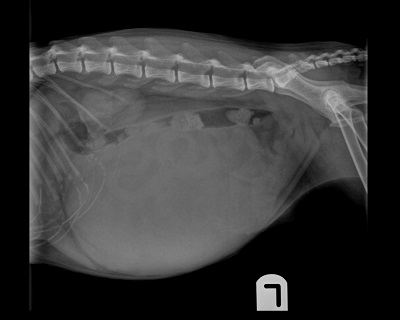 We discussed the options for further treatment with Kitty’s owner and agreed that an exploratory surgery, where we open up the abdomen to take a look, would be the best next step.  This was a worrying time for Kitty’s owner, as we could not be sure whether the problem would be treatable at this stage.

Kitty was prepared for surgery in our fully equipped theatre, where her anaesthetic was closely monitored by our qualified Veterinary Nurse, Jane France, RVN.

Rachel Watkinson, the operating vet, made a large incision across the underneath of Kitty’s abdomen. This had to be done extremely carefully as the abdomen was so swollen from the cyst that she had to be careful not to burst the cyst on opening the abdomen. 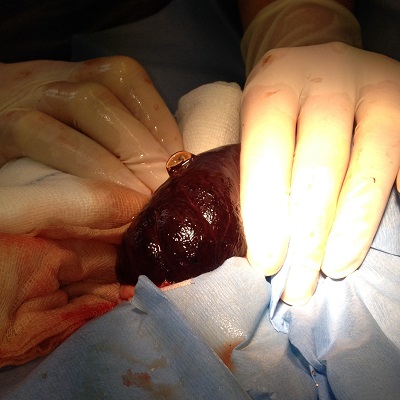 Inside we found a fluid filled cyst larger than a coconut attached to the liver. To allow safe removal of the cyst we had to drain fluid from it first via a needle and syringe, this was a slow and delicate procedure, but eventually we were able to lift the cyst up out and out of the abdomen and then surgically remove it from its attachment on to the liver. This sounds simple but with the large risk of causing bleeding, Rachel had to handle the tissues with great care. With the cyst safely removed and the rest of the abdomen checked for abnormalities we were then able to suture the abdomen closed. Kitty’s recovery was very good, she stayed in the hospital overnight for intravenous fluids and pain relief, but was eating and looking bright the next morning and was discharged to her owner.  We had to wait for the laboratory results the week following surgery to  tell us what the cyst was and what the risk of reoccurrence would be.  The results confirmed that the cyst was a Biliary cystadenoma.  This was good news as it suggests that it was a non-cancerous cyst which can occur early in life or develop later on from liver cells that secrete fluid. Kitty now stands a good chance of full recovery and within a few weeks of surgery she is already much happier, eating well and her anaemia is resolving. Kitty certainly must have felt much more comfortable without that big, swollen tummy!

Although Kitty’s case of a liver cyst was quite unusual, unfortunately we commonly find masses in the abdomens of pets, particularly older pets. Often symptoms can be mild and they can vary depending on which part of the body is effected.  Any of the following symptoms can be seen with abdominal masses.

If your pet seems to be acting unusually it is best to have a health check performed by your vet so abnormalities can be picked up on quickly. Fortunately for Kitty, her owner picked up on the symptoms quickly and enabled us to give her prompt treatment. 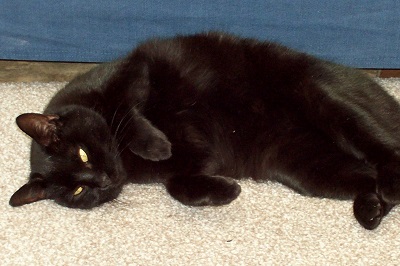