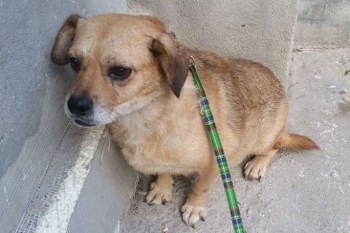 This is Josie who Gina, one of our Veterinary Nurses, has adopted, after importing her from Romania.

Josie was in a very sad state when we met her, and as very shy and withdrawn.

She was quite lame, with osteoarthritis affecting both of her elbows. We have started her on long term anti-inflammatory pain killers to assist her with this, and make her more comfortable. She also had various other minor problems. 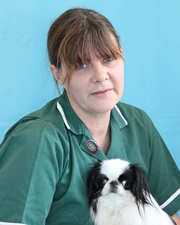 Gina says, “I’m not even really sure how Josie ended up in my home, my rescue passion is the Spanish Galgo one of the most abused dogs in the world, of which I have a few! Josie popped up on my news feed, an old lady of 12, with no teeth, overweight, injured front leg and ingrowing claws. When I read about her chronic vaginal discharge, that was slowly killing her, well, somehow two weeks later she arrived at home, then her surgery date was booked.”

Her main problem was linked to a vaginal discharge she had been suffering from for some time. We took Josie to surgery and the cause of her problems was obvious. Her uterus was very abnormal. She also had a very large cyst on one of her ovaries. Most people have their bitches spayed when they are relatively young nowadays, because they understand the problems that can arise later in life, in entire bitches – like mammary cancer (quite common), ovarian cancer, unwanted seasons and litters, and occasionally behavioural changes. 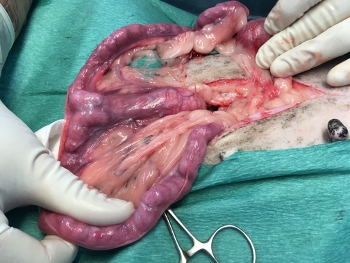 When we opened the uterus, the uterine walls were thickened and tortuous. The lining was also inflammed, with multiple large cysts along its length (cystic endometrial hyperplasia and metritis). This is a precursor to pyometra, which we see quite commonly in older, entire, females. This is one of the reasons we recommend that bitches, not intended for breeding, should be spayed. 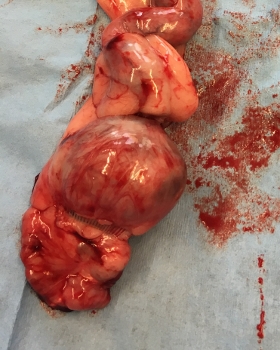 The large cyst on the ovary was also a problem. We are not sure why dogs get ovarian cysts, but they often produce high amounts of oestrogen which can lead to swelling of the vulva, vaginal discharge, irregular or lack of cycles, hair loss and behavioural problems.

We removed the uterus and both ovaries (ovarohysterectomy).

Josie went home with painkillers. Within a very short period of time she had fully recovered from surgery. What’s more, in her new loving home, she is really starting to ‘come out of her shell’ and is behaving much more like a normal, fun loving pet.

Apart from being dedicated to her Veterinary Nursing career, Gina is passionate about the charitable side of caring for animals. To the extent that she has strong links to, and regularly goes over to volunteer for, Carlotta Galgos. 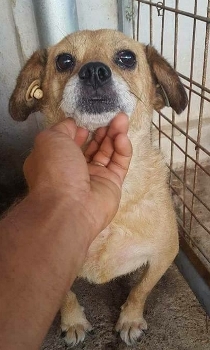 Josie struck lucky to have Gina find her and take her in.Who knows what could have happened to her, without Gina’s love. 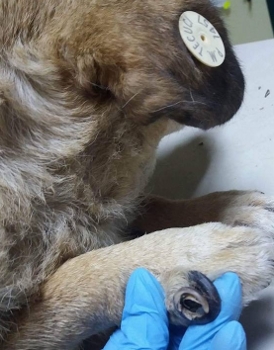