We first saw Jade for problems with her skin a year ago.  She initially responded well to treatment with a topical steroid cream.  Unfortunately, after the initial improvement, her skin problems progressively worsened over the following year.

There are 3 different forms of EGC.

1.     Eosinophilic / indolent ulcer: These occur on the edge of the upper lip.

Eosinophilic plaque: Well demarcated, flat swellings on the skin (often the ‘tummy’ area) with a reddened appearance.  Hair is usually lost from the affected skin.

3.     Eosinophilic granuloma: Usually a nodular or linear area of raised, thickened skin that may be reddened.  Can occur anywhere including the tongue/palate.  Hair loss is common.

Most cases of EGC are caused by some form of allergic (hypersensitivity) disorder and are often very itchy.  We started Jade on an 8 week food trial to attempt to rule out any food allergies and took some blood to send away for allergy testing. Flea allergic dermatitis is a common cause of ECG but Jade was found to be flea free and using a good monthly flea prevention.

We discussed ways to attempt allergen avoidance and although this is unlikely to be possible with so many positive reactions, there are ways we can minimise exposure to allergens such as dust and storage mites.  We had started Jade on prednisolone (a steroid tablet) to settle her skin and although her lesions were responding well to this, we were reluctant to treat her with steroids long term due to the potential side effects (one of the side effects is weight gain which the voluptuous Jade can ill afford).

Another treatment option was immunotherapy but with only 5 allergens included in any one allergy vaccine this may not have been effective for Jade. 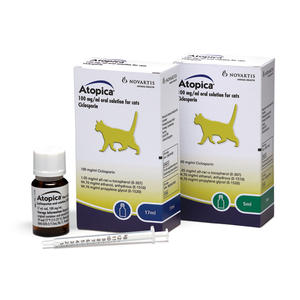 After discussion with her owner, we made a decision to treat Jade with a drug called Atopica.  Atopica contains cyclosporine which blocks the release of inflammatory molecules, breaking the itch-scratch cycle. Atopica for cats is in liquid form and is given daily for 4 weeks and then decreased to every second and possibly every third day once the skin condition is under control.  Jade started her Atopica treatment at the end of April and her skin progressively improved.  She now has a lovely coat with no skin lesions and is happy and settled and no longer itchy.

Jade has been a star patient from start to finish.  She is a lovely gentle cat and tolerated all examinations (including her blood tests) incredibly well.  Good luck Jade, we hope you carry on through the rest of your life itch free.