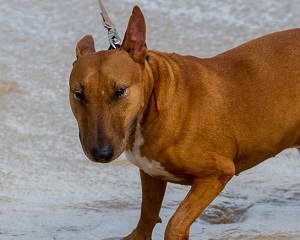 Harvey came to see us after a couple of days of straining to pass urine. By this time he was only able to pass small dribbles of heavily blood stained urine. He was clearly in a lot of discomfort and seemed quite miserable.

When we examined him his bladder felt very enlarged, swollen and as tight as a drum. We immediately admitted him for further investigation.

Blood tests showed that he had a high white blood cell count consistent with inflammation or infection. He also had increased levels of urea and creatinine. These are waste products usually cleared by the kidneys, and clearly this wasn’t happening. 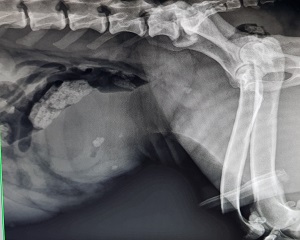 We sedated Harvey and X-rayed and ultrasound scanned his bladder and abdomen. The xray image showed his enlarged bladder, and if you look carefully you can see small, opaque shapes in the bladder lumen. The urethra, which drains the bladder, runs round and down between the back legs, exiting through the penis (which contains a long horse-shoe shaped bone in dogs). Another small opaque shape was sitting immediately behind the bone in the penis. 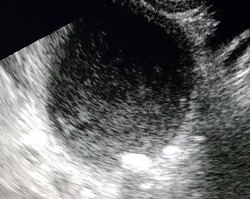 The scan images show multiple small white shapes in the bladder and in the urethra just after exiting the bladder. 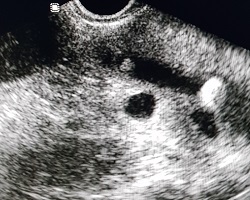 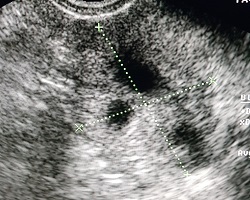 We also saw that Harvey’s prostate gland was enlarged, and contained multiple fluid filled cysts. The prostate gland usually makes semen which empties into the urethra just after exiting the bladder.

It turned out that Harvey had multiple bladder stones, some of which had gained entry into the urethra. One had completely blocked the urethra just behind the bone in the penis, so Harvey couldn’t pass urine. The bladder had filled up and back pressure on the kidneys was stopping them from working properly. Infection was present and the infection was not only affecting the bladder (and possibly the kidneys), but had also entered the prostate gland.

We retropulsed the blockage in the urethra using a gel to pump the stone back into the bladder. We then drained and flushed the bladder and started him on antibiotics. Intravenous fluid therapy helped restore the kidney function. A couple of days later Harvey had surgery to remove all the stones from the bladder. We had these analysed and found them to be made of magnesium ammonium phosphate (struvite).

We see a whole range of bladder, kidney and prostate problems including simple infections, stones, polyps, cancer, genetic abnormalities. Urine tests can tell us a lot of information about health of the urinary system but also more general health. We often ask for urine samples to help with the diagnosis and treatment of many conditions.