A gift for someone special 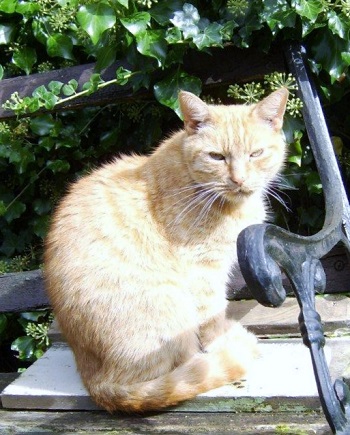 Last autumn I saw a stray cat in the back alley of the terraced houses where I live. The ginger cat looked thin and unwell.  It scarpered over the fence and hid in the bushes when I tried to approach him.  I called it but it ignored me.

From that day I started to leave bits of food behind my gate.  Every morning the dish was empty.  I felt sorry for the stray and decided to keep my gate ajar during the day.  I made him a cosy bed under my garden bench – by the brick wall.  It was located under the pergola a sheltered place from wind and rain.

After a while I noticed that the ginger (miniature tiger) was using his new abode every night.  To a stray cat the sturdy, cardboard box must have felt like a ‘luxury flat.’  Eventually he decided to stay in my garden and used the garden bench as a ‘deck chair.’  I saw him sprawled upon it during the days, keeping the various intruders at bay.  Catching mice and leaving them near my back door, trying to catch a few birds.  I scolded him for trying whenever I saw him stalking the ‘winged singers.’

Even though I kept leaving him cat food in a special dish I could not gain his trust for many months.  Whenever I tried to come close to stroke him he was off like a ‘bullet.’  None of my method s worked.  ‘The ungrateful creature,’ I thought but, even though he wouldn’t let me stroke him, I was happy to have him around.

Since I lost my partner I was missing his company and I wished that Ginger would eventually get used to me and come inside.   I was ready for a new friend and kept my back door open with a dish full of treats.  My neighbour told me that the cat needs time to get to know me.  We came to the conclusion that he was badly treated by its previous owners.  He didn’t like men and still freaks out when a stranger appears at my door.

It took me many weeks to entice him inside my kitchen.  The day he ventured into his new surroundings he acted cautiously, sniffing at the furniture.  I knelt on the floor and held out a treat.  My heart leapt with joy when he came to me and took it from my hand.  I let him sniff my fingers which he did and then he weighed me up with his green eyes.  I must have passed his test for he lay on the floor and watched my every move nervously.  I talked to him reassuringly hoping that he would understand my friendly message. 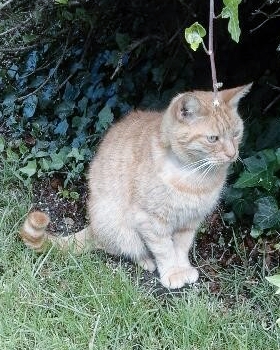 “You’re welcome to stay with me if you like,”  I told him, but as soon as I closed the back door Ginger went frantic.  He ran around the kitchen, mewing, looking for a way out.  Then he jumped onto the sink and tried to jump out through the window pane.  I quickly opened the back door and he dashed outside.

“Please yourself!”  I shouted after him, disappointed at his lack of gratitude but decided to keep my back door open, just in case Ginger would change its mind.  After a few hours, just as the night was drawing in and I was just about to close the door, Ginger decided to stroll inside.  He came to me and rubbed himself against my legs and even let me stroke him.

“Hello there, it’s nice to see you again.  Well, have you decided where would you like to sleep tonight, inside my house or under the bench?”  He mewed.   I put my hand on the door handle saying, “Ginger, I have to close the door now are you staying or going?”

To my delight Ginger decided to stay permanently.  Now he is my constant companion, and follows me from room to room.  He sits by my feet or on my lap, licks my hands and even ventures into my bedroom.

The day after my friendly Vet checked Ginger over and told me that he was clean; I let him jump onto my bed.  Now and then I keep wondering who has sent him to me… How did he know that I was short of a new friend and faithful companion?