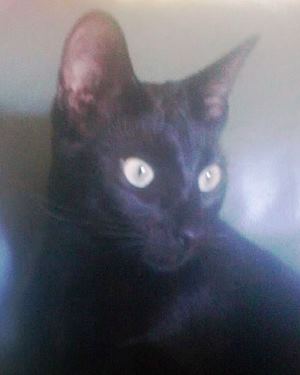 ‘Friday’ the 13th is so named as he is the 13th feline member of the Dunn family.

Unlucky for some, he was certainly in a lot of discomfort when he returned home 10/10 lame on the night of Saturday 3rd  May, the result of a unknown accident during his nocturnal ramblings. 10/10 degree lameness is the most severe category, and in cats usually results from a fracture or a severe infection.
Friday is a 15 month male neutered Siamese cross, quite small and dainty for a male cat, weighing 3.2kg. When we examined him his right hind leg was dangling uselessly and he was not at all happy to have it gently palpated! Friday was admitted straight away for painkillers and radiographs. Friday was a very affectionate cat even when in pain as he was admitted. All through his stay he seeked attention and cuddles.

Xray after being admitted: 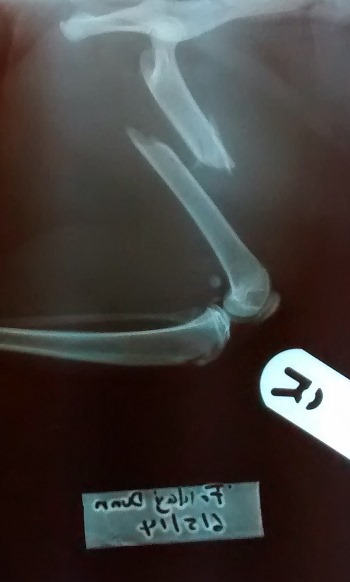 X rays revealed a spiral mid shaft fracture of his femur. Good news was that no other damage (such as a pelvic fracture) was evident, and the break didn’t involve any joint surfaces. Bad news though – as the fractured ends of the bone were fissured and sharp the bone ends would be weak, liable to splinter and more difficult to fix.

The surgery was scheduled for two days later and ‘Friday’ was hospitalised at our Bolton surgery until then. He soon started to eat and was kept on painkillers in a confined cat cage to reduce movement and the chance of any further damage.
The surgery consisted of pushing a metal pin up through the middle (medullary cavity) of the femur to fix the two bone ends in line. In addition, three cerclage wires were tightened around the circumference of the bone at the fracture site to further stabilise the repair. As always, a post surgery radiograph was taken to check the repair was sound.

Anaesthetised, being carefully monitored and prepared for surgery: 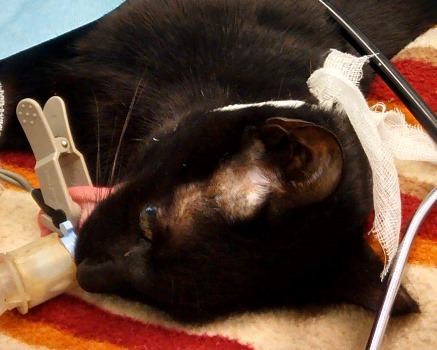 The fracture site has been exposed and cleaned: 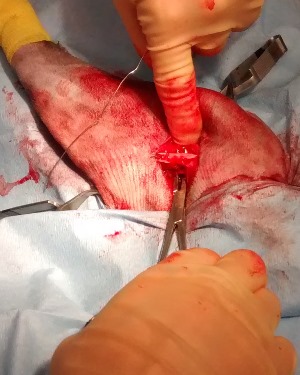 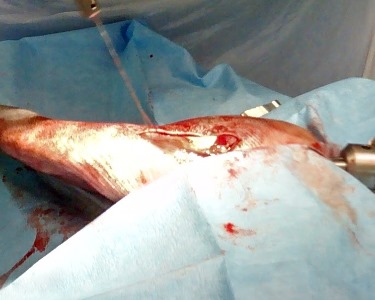 Pin Being cut to length: 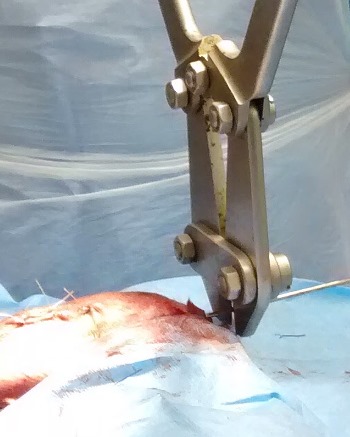 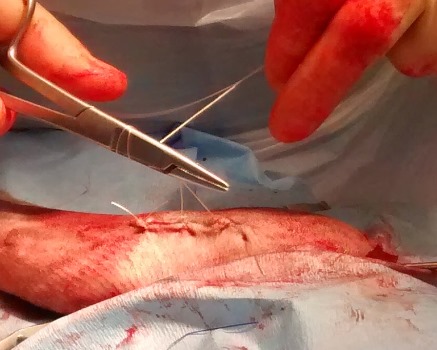 Over the next few weeks, Friday was kept confined in a cage at home, diligently and attentively cared for by Mr and Mrs Dunn. He experienced some irritation around the head of the pin (which lays just under the skin) and needed to stay on painkillers for longer than anticipated, until a second post operative radiograph taken on Thursday 5th June revealed a good callus (bone union) had occurred at the fracture site and the pin could be removed. 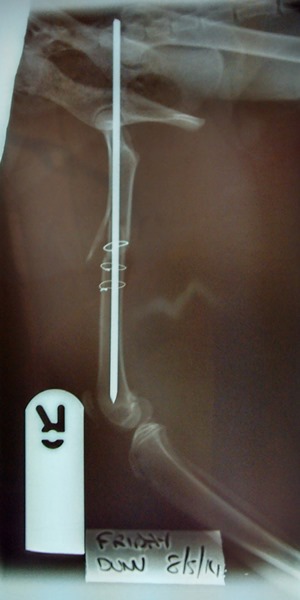 Sometimes we leave metalwork in the leg for the rest of the pet’s life, but more often with pins, we remove them when the fracture heals. The removal is quite a quick and simple operation, much easier than the original repair.
We are pleased to say Friday is again enjoying life to the full. Thank you to Mrs Dunn for providing the current  photographs of him. We are all hoping “Good Friday” learns from his mistake and avoids accident black spots in the future! 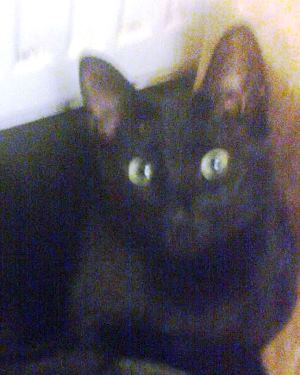 Remember, this sort of accident is common but hospitalisation, xrays, surgery and aftercare can become expensive. Always think about Pet Insurance to help cushion the financial consequences of this type of injury!