You are in: Home > Stars > Chester

Chester and his Misadventure! 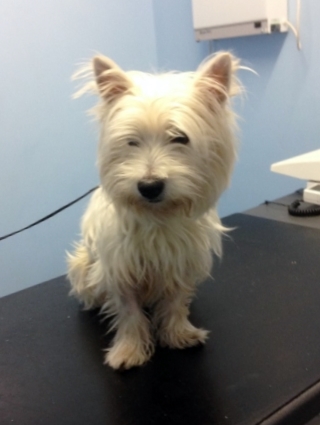 Chester is a 7 year old Westie who came to see us with vomiting, a poor appetite, and he hadn’t passed any motions for a few days. On examination, although Chester was quiet in himself, there were no obvious abnormalities. However, after talking to Chester’s owner, we discovered that Chester had enjoyed some Lamb bones earlier in the week, just previous to these signs starting.

Options were discussed and it was decided that Chester would be monitored overnight, but if there was no improvement we would take an X-ray.  Unfortunately, Chester deteriorated further, and he had now started vomiting blood.  Radiographs were taken and they showed multiple bone-like abnormalities in the stomach. 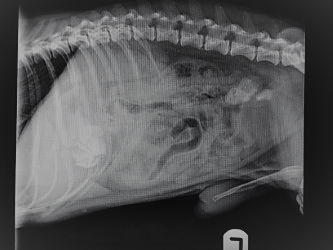 In some cases, where animals have eaten things they shouldn’t (like socks/balls/rocks), the body manages to pass them through without too much discomfort. However, in many cases we see signs like Chester’s where the body isn’t able to pass the problem itself and needs help from us.

As Chester was feeling so poorly it was in his best interest to proceed with removal of the bones from the stomach, this was arranged for the following day with our lovely veterinary Surgeon, Ailsa Williamson.

Chester was initially stabilised on fluids, then put under a General anaesthetic for the operation. Further radiographs were taken to check the progress of the bones.  The radiographs showed bone-like abnormalities in both the stomach and now one in the intestines too.  However, the one in the intestines appeared to be causing a blockage. Multiple large pieces of bone were removed from the stomach. The intestines  were checked, and the offending fragment of bone causing the blockage was removed through a single incision.

Chester is now home recovering well from his surgery, and will soon be running around as normal thanks to all the team at Vetcare.

Please remember to be careful when giving your animals different foods. Bones can, and do, cause major problems. We see many cases where animals have eaten things they shouldn’t, so please be extra vigilant, especially with young animals, and those who are known scavengers.