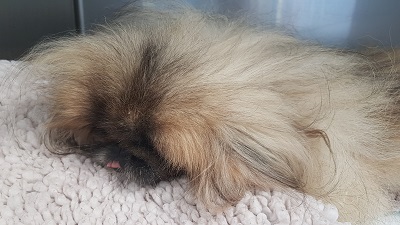 Chester came to see us in a lot of pain, with a lameness affecting his right hind leg. When we examined him we couldn’t decide if he had a problem with his leg, his hip, his spine or his abdomen. He was a difficult patient to examine (partly because he seemed to be in so much discomfort). We gave him powerful medication to manage his pain and reduce inflammation, but despite this, his problems continued. 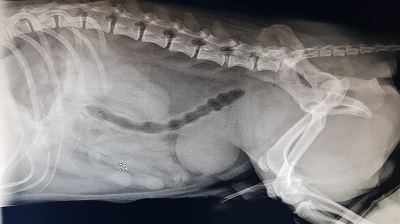 So we brought Chester into hospital to investigate further. We examined Chester under Anaesthetic and were able to feel a mass lesion in the back of his abdomen. Xray images showed an elliptical soft tissue swelling behind his bladder which has been pushed forwards. You can see the bladder clearly at the back of his tummy, and behind that the other soft tissue shadow. The black gas filled pipe above the bladder and soft tissue swelling (with contracting circles) is colon and rectum.

This soft tissue mass is an enlarged prostate gland. The Prostate gland has two large lobes and wraps around the urethra and neck of the bladder. The prostate makes semen but can be affected my many problems including infections, benign enlargement (hyperplasia), cancer and various types of cyst.

Also on the xrays, if you look at the lower spine, you can see a mineralised disc space which would have had some problems at some stage. On other xray images, not shown here, we also saw that he had some problems with his hip joints, that possibly compounded us finding exactly where his pain was coming from. 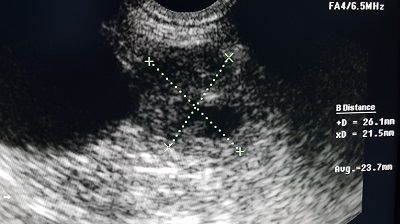 We did an ultrasound scan and could clearly see the structure of the prostate gland and was able to measure it. We could also see dark cavities within the prostate. We carried out ultrasound guided aspirates to help us elucidate exactly what pathology was affecting Chester. We also obtained a sample of fluid with blood and pus from the cavity which we sent for culture to find out what organisms were there, and to help us decide which antibiotic would be best to use to treat his infection.

This all happened on 1st/2nd September 2018, so it is early days yet, but Chester is responding to treatment and we will keep you updated as to his progress over the coming days. We are still waiting for some of his results to come back.

[update 7th September 2018 – Chester’s results came back and confirmed that he has prostatitis with abscessation. The laboratory identified the bacteria involved – E Coli, and the best antbiotics to use for treating the abscess. We are now managing his pain with non-steroidal anti-inflammatory drugs and paracetamol and waiting to see how he responds to antibiotics. We will keep you informed] 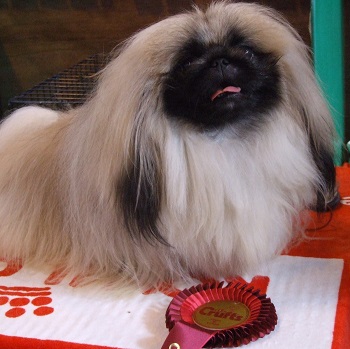 Prostate disease is not that common but we do see it, usually in older uncastrated males. Some of these problems can be prevented by castration, but this shouldn’t be the only thing you think about when you are thinking about having your male dog castrated. It is probably best that you ask us about this so we can help you decide if castration would be best for your male dog.