You are in: Home > Stars > Charlie

This is Charlie our 12 year old “Star” of June. 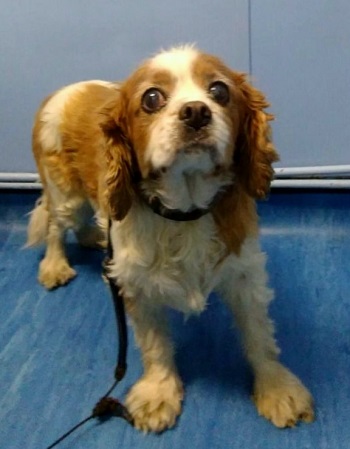 Charlie is nearing the end of a two year course of chemotherapy.

In September 2014 Charlie presented with a swollen eyelid which failed to respond to eye drops. We thought initially it was a deep seated infection within one of the eyelid glands or some foreign material leading to a reaction. The failure to respond and the added symptom, a week later, of enlarged lymph nodes which we could feel at the angle of the jaw, in the neck and most worryingly in all four legs raised the worrying suspicion of lymphoma.

Lymphoma is a common cancer in dogs and causes abnormality of a type of white blood cell called a lymphocyte. These abnormal white cells can invade any organ of the body, most commonly the lymph nodes, spleen and liver.

Biopsies of Charlie’s eyelid and lymph nodes confirmed these areas were packed with these abnormal cells, but fortunately further tests revealed no evidence that the internal organs of the chest and abdomen were involved as yet and Charlie remained unperturbed by his condition. Blood tests showed Charlie was slightly anaemic but no other blood abnormalities were evident.

From October 2014 Charlie has visited the surgery every 3-4 weeks as a day care patient. On each visit he is warmly welcomed, and even though it can’t be a nice experience for him, he does seem pleased to be with us!  A blood sample is taken to check the number of his circulating blood cells and if this is satisfactory he has an intravenous injection, followed by tablets- both these drugs combat the cancerous cells.

It is quite unusual for a dog with confirmed lymphoma to survive as long as Charlie and he has maintained an excellent quality of life and been otherwise healthy apart from a few tummy upsets and a recent corneal ulcer from which he is now thankfully recovering well. We are sure that his stoic outlook and his calm and happy personality have as much to do with his continued enjoyment of life as all the drugs he has been given! We salute him as a brave and courageous little patient, always a pleasure to see him, and very worthy of our “Star of the month” award.

We see a wide range of cancers in our pets and we recommend that whever you notice a lump or other abnormality you should come to us so we can check it out. Most lumps that we see turn out to be benign but it is always best to check – the earlier the better.