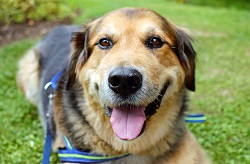 Bill had been struggling to get up from rest for several months, and more recently wasn’t as keen on his walks, occasionally appearing lame on one or either of his back legs. Then all of a sudden, out running, he pulled up sharp and couldn’t really put his right back leg down. His owners quickly made him an appointment and brought him down to the surgery.

The owners thought Bill had broken his leg, but the Veterinary Surgeon quickly ascertained that this wasn’t the case. He was however, very painful when the knee joint was examined, and particularly when the Vet gently pulled against the front one of the two cruciate ligaments. Suspecting some damage here, Bill was given some anti-inflammatory pain relief and rest was advised until we were able to xray him the following day. 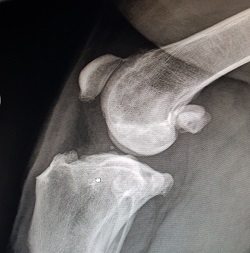 Under sedation we were able to examine Bill more closely and took xray images of both of his knees, and his hips. Bill’s hips were in good shape, but both of his knees showed evidence of Arthrits. There was excessive amounts of fluid in the joints and new bone growing, as a consequence of chronic inflammation, at the top of the tibias, around the ends of the femurs, and at both ends of the patellas. On the right hand side there was instabilty of the joint, and we were able to move the tibia backwards and forwards in relation to the femur. Bill had completely snapped the front cruciate ligament on this side, and it looked like the one on the other leg wasn’t far from going.

We scheduled Bill for Surgery on his right leg and we will report back on Bill’s journey in a future Star Patient Report. Watch this Space.

Arthritis is a really common problem in dogs and cats and there is a tremendous amount we can do to help. If your pet shows any of the following then it is probably a good idea to come and see us. It is not nice seeing your pet in pain and treatment can be really helpful:

–       difficulty in getting up – especially in the morning

–       aggressive, irritable or yelping/flinching when touched

Cats can also get arthritis and their symptoms can be more subtle including not jumping on surfaces like they used to, going out less often, seeming to sleep and rest more. You might think they are just ‘getting older’when the reality is that they are actually in pain.

Bill’s case also highlights the importance of imaging. Rather than just guessing at the cause of a lameness, taking xrays can allow us to make a definitive diagnosis, check for other problems, and develop a tailored treatment plan, offering options that take into account all that we have discovered, and offering the best solutions.