Ben had not long settled in with his new owners when he came home limping badly on his left hind leg. His owners brought 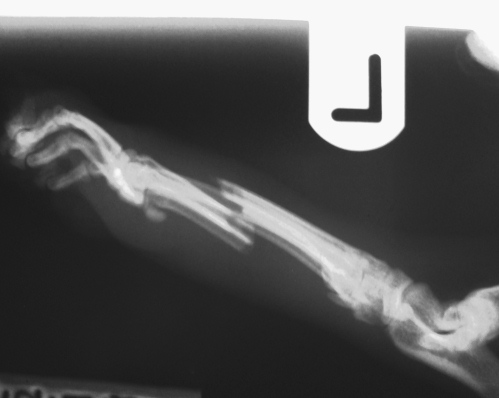 him in to see us straight away. He had numerous puncture wounds to his very swollen lower leg. Ben was admitted for radiographs which showed that he had fractured 3 metatarsal bones (the long bones in the hind foot that connect the toes to the bones of the ankle) and that these bones were mal-aligned. His fractures were reduced (manipulated into a more normal position) under general anaesthesia and his leg placed in a very large supportive bandage to keep his leg as still as possible.

We could only speculate how Ben had attained his injuries but due to the small puncture wounds present were suspicious of a fight with another cat. Ben is an avid hunter and loves the great outdoors and the challenge of cage rest was a daunting task for him and his owners but they diligently went to purchase a cage where Ben would have to spend some time confined until his fractures healed.

He had numerous trips to see us in the early days to treat and assess his wounds and replace his bandages. Fortunately for 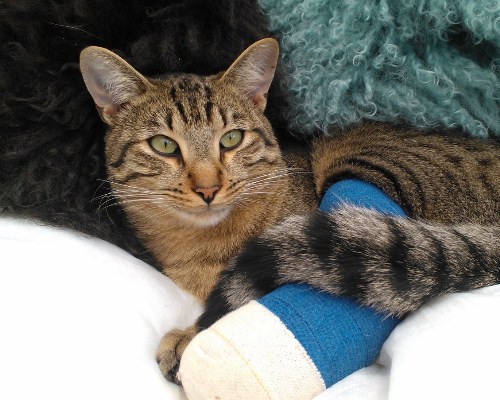 Ben his fractures have healed with cage rest and support bandages and after 8 weeks he is out and about and back to his old ways (he brought a pigeon in through his cat flap last week). Ben has been a real star patient. He has a lovely nature and was very tolerant putting up with us injecting, assessing and treating him on a regular basis and reluctantly putting up with  the cage rest which was necessary for his bones to heal.
We see a large number of cats with fractured bones, commonly after road traffic accidents. These fractures sometimes require surgery with plates/screws/pins to fix them. Certain complicated fractures may even require referral to an orthopaedic surgeon for repair. This can be costly. Ben is now insured. Although he still faces all the perils that life holds, any future illness or injury will not put a financial burden on his family.

Most people can afford the cost of paying monthly for Pet Insurance but may struggle to afford, at one go, the treatment costs associated with a fracture repair (£800 to £3000). Similarly the costs associated with a long term disease like osteoarthritis or diabetes can also be costly. If your pet isn’t already insured then we strongly urge you to consider it. Examine the policy carefully before you buy as the peace of mind that a lifelong policy offers (rather than a 12 month policy which will only cover to costs associated with a new disease for the first year) cannot be understated. If you have any questions about life insurance then please speak to reception who will be happy to help. Here is the website of one of the common insurers we deal with which will offer you some initial thoughts and guidance.