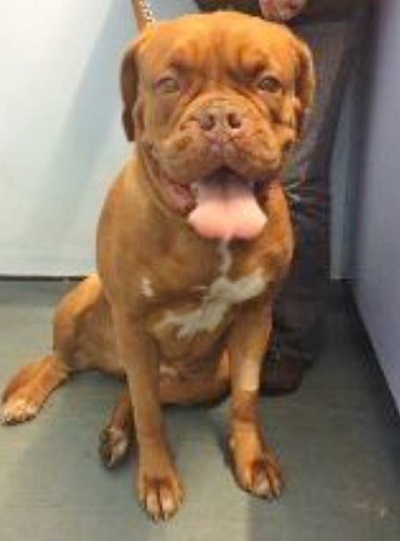 back in February to be checked over. The owner had noticed some discharge from her

vulva which had started that same morning. The owner had also noticed that Amber had

been sick once on the same day which was unusual. Amber’s last season was reported to

have been back in mid October.

On presentation Amber was bright and happy in herself, but she had a lot of green/yellow

thick discharge coming from her vulva in the consult room. The vet at the time also

checked her cervix, which did feel to be partly open and at the time Amber was also

As Amber’s season had been fairly recent and due to the presenting clinical signs, Amber

was suspected to have an open pyometra which is a womb infection (pyo = pus, metra

With Amber, because there was an obvious discharge from the vulva and she seemed

otherwise well in herself, this was suspected to be an open pyometra where the cervix is

open or partly open and allowing some of the infection to drain away. There is a more

serious type of pyometra which is classed as closed pyometra. This is where no discharge

occurs, and the cervix is closed. This often can be more of an emergency as the infection

has nowhere to go. This means there is a risk of rupture to the uterus or womb and can

shock. Occasionally, if left untreated, this can lead to life threatening conditions like kidney

failure / organ failure and could potentially lead to death from these complications.

If we ever suspect a closed pyometra (no discharge evident), we will sometimes take a

abdomen to look for signs of an enlarged uterus or womb.

The owner was planning on having Amber neutered anyway, which we would normally

pyometra at the time, it was important to perform an ovariohysterectomy (surgical removal

of the uterus and ovaries) as soon as possible. 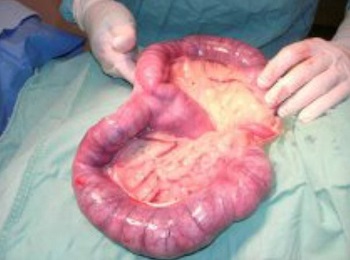 Amber was given an injection of anti-inflammatory/pain relief and antibiotic that evening and returned for her surgery the following day, where we removed the infected cervix and uterus. She was put onto fluids throughout the procedure to correct any dehydration and went home with a course of antibiotics and pain relief. Here you can see an example of pyometra surgery – this picture is taken from a previous pyometra surgery (rats star patient may 2013).

Amber returned to the Hindley surgery  a few days after her surgery, looking much better

with no discharge evident and recovering well from surgery. Her temperature had returned

to normal and she was eating and drinking well, and taking her medication like a star 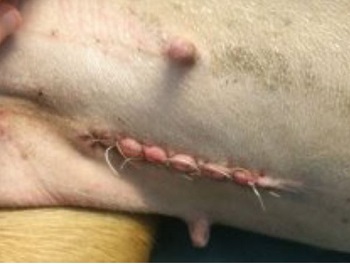 the wound. Amber had these removed 10 days after her surgery once her wound was fully

In summary, facts to remember about pyometra:

as above can sometimes occur in younger females.

from the last season, however as in Amber’s case occasionally this can occur 1-12

weeks after the last season.

– when a female has a season – twice yearly normally, hormonal changes will occur despite

if she is pregnant or not. This leads to changes in the uterus, which can make infection

more likely with age. The infection typically tends to be caused by E.coli bacteria.

– discharge may be evident from the vulva or they may be paying more attention i.e. licking

or bothering with their back end more than normal.

– vomiting may be evident

– increased thirst and increased urination are often noticed, occasionally the dog may be

drinking so much that they start to have accidents in the house.

– the dog may appear off colour, not wanting to eat and can become quite depressed and

not want to move about much.

– the dog may also have an obvious swollen stomach, where the pus filled uterus can be

felt by the Veterinary Surgeon.

– if left untreated symptoms can worsen over days to weeks, and can lead to dehydration,

showing any of these signs not long after her last season has ended.

We recommend spaying female dogs to prevent pyometra from occurring. There are also

other added health benefits to spaying a female dog, such as preventing false pregnancies

cancer) later in life. For more information on spaying or pyometra please see our neutering

information page on our website. Remember at 6 months we normally do a free

developmental check up with the Veterinary Surgeon, where we can discuss neutering and decide when is the best time to neuter your pet.